-First prototype of the idea-

CyberWave is the concept for a game in a Battle Network style.
This means, an action rpg, with grid based combat, and a strategy/deck building component.

This version of the concept only contains the first draft of the combat part.

-During the selection screen, you must chose what powers you will use for the next round. Once you selected your first power, the following ones must be of the same type, or have the same letter attached to them, with the exception of the golden omega, which is a joker that will power up the attack before it.

Once you are satisfied with your hand, you can exit the screen and start the fighting round.

-During the action phase, you move in real time on a grid. The outline of the squares indicating if you can walk on them or not.

Your objective is to destroy the enemies by reducing their HP to 0. In order to do that, you have access to the hand of power you chose earlier, from which you will use the attacks in the same order that you chose before. In addition to this, the character automatically charges a shot (indicated by a blueish hue), and a shield (indicated by the loading bar under them) which allows to stop any attack for a short time.

On the bottom of the screen is a loading bar. This is the reloading bar. Once it's fully charged, you can discard what's left of your hand, and go back to the selection screen to get a new one. As such, the main gameplay is switching between unloading your arsenal and surviving until the next round of powers.

Space/I/A button = Activate the next power/Select a power on the selection screen. 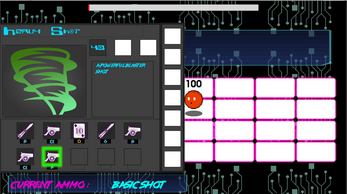 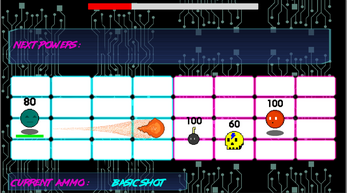 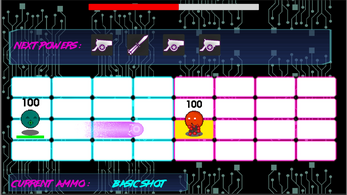